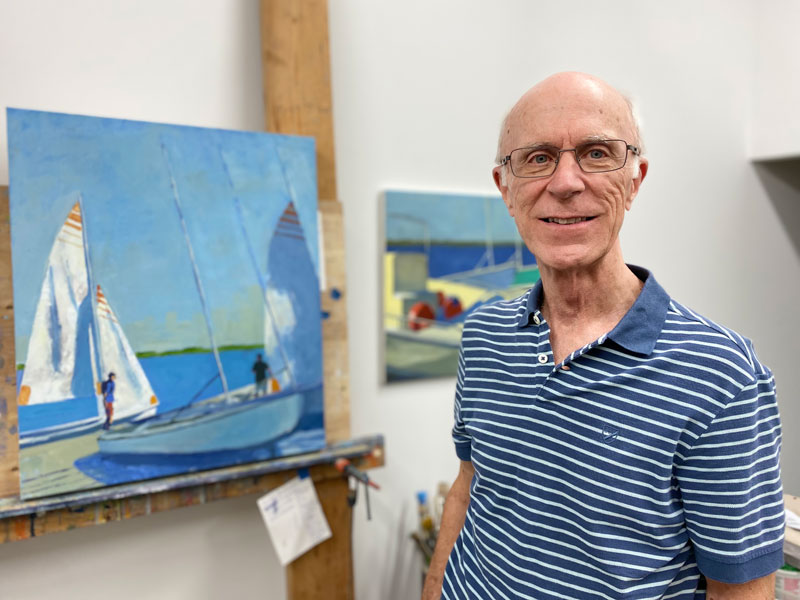 “Winter Park’s downtown, neighborhoods and lakes serve up a daily menu of colors, shapes, light and shadows,” says artist Robert Ross, who gets many of his ideas while walking around the city. Photo courtesy of Robert Ross

Robert Ross gets most of his ideas for paintings during his daily walks. “Winter Park’s downtown, neighborhoods and lakes serve up a daily menu of colors, shapes, light and shadows,” says Ross, a native of Flint, Michigan, who majored in English and worked for 30 years in public relations.

He had always loved art, but was determined for years to become an author. He chose to concentrate on painting after finding it difficult to sell poems and short fiction.

A life drawing class with Rima Jabbur at the Crealdé School of Art — where Ross is now an instructor — and landscape painting workshops with Philadelphia-based modernist Stuart Shils persuaded him to become an artist full time in 2013, after he retired from his job as an editor at Embry-Riddle Aeronautical University in Daytona Beach.

Since then, collectors have discovered Ross’s distinctive, often geometrically themed images at festivals and galleries throughout Florida. He’s also a regular at the Winter Park Paint Out, a plein air event sponsored by the Albin Polasek Museum & Sculpture Gardens, and has been an award winner at the Winter Park Autumn Art Festival.

In 2020, Ross’s paintings were featured in an exhibition, Unique Perspectives: Paintings by Robert Ross, at the Museum of Arts and Sciences in Daytona Beach. That same year, the Polk Museum of Art in Lakeland displayed two of his oil-on-canvas creations during a pandemic-themed online exhibition entitled Hindsight 2020: Art of This Moment.

Ross, whose works often depict buildings or details of buildings, says he’s “especially drawn to the interaction of man-made structures with trees and the sky. In fact, the spaces between things often become the focus of my paintings.”

This issue’s cover image, which for Ross marks a bit of a departure, was the result of a walk with his wife, Claudia Thomas (also a painter), through the campus of Rollins College. “It’s our favorite place along our route,” he says.

There Ross saw several members of the college sailing team bringing in their boats after a sojourn on Lake Virginia. “I took photos of two of them working at the dock, which I found more interesting than a typical view of sailors on the water,” he says. Ross based the painting, entitled Striking the Sails, on the photos.

Ross has maintained a studio at McRae Art Studios in Orlando for the past decade. To see more of his work, visit robertrossart.com.