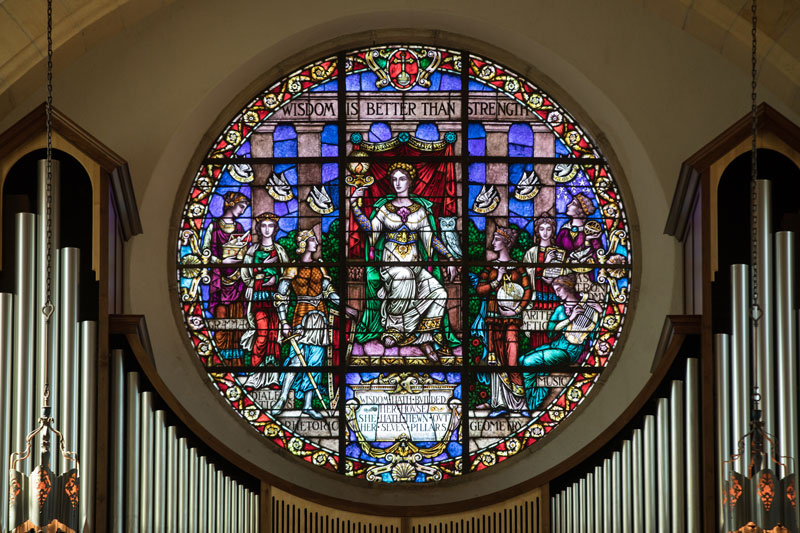 Circular stained-glass windows — often referred to generically as “rose windows” because many are adorned with rose-like petals — originated with medieval gothic cathedrals. Such windows, including the one at Knowles Memorial Chapel at Rollins College, are meant to symbolize the spiritual beauty and power of the heavenly vision through geometric patterns and brilliant colored light. Photo by Rafael Tongol

Knowles Memorial Chapel, designed by renowned architect Ralph Adams Cram and dedicated in 1932, is justly recognized as one of the nation’s most beautiful college chapels. Whether you’re a member of the Rollins College community or a visitor to the campus, the chapel is well worth a few minutes of exploration.

When you enter the building, continue through the vestibule and walk 20 paces into the nave, then turn and look high up beyond the balcony. Your eyes will fall immediately upon a central feature: the circular stained-glass window that overlooks the sanctuary and the campus.

If it’s a sunny day, you’ll be astonished and perhaps even reverentially moved by the light pouring through the multicolored glass.

Look closer. Unlike traditional geometrically designed circular windows, you’ll notice the chapel window is filled with human figures as well as lettering and unusual ornamentation. Why did the artist design this style of window and, beyond its decorative qualities, what do all those figures represent?

Circular stained-glass windows — often referred to generically as “rose windows” because many are adorned with rose-like petals — originated with medieval gothic cathedrals. They’re meant to symbolize the spiritual beauty and power of the heavenly vision through geometric patterns and brilliant colored light.

Every element in a rose window has a degree of meaning, and all the elements come together in a single cohesive theme that encompasses both the real and the symbolic. Nothing is placed randomly, and even the number of images shown usually has significance.

Think about the importance of specific numbers in the Bible. There’s the Trinity, or the concept of God the Father, God the Son and God the Holy Spirit as three in one. Think, too, of seven as a symbol of completeness and perfection, and 12 as a symbol of faith, the church and divine rule.

Yes, there’s logic, but also majesty that doesn’t require much analysis. Scholar Charles Jay Connick wrote that rose windows are “based upon a belief in the spontaneous emotional appeal of pure color alive in light. … A great window against the sky is like an orchestra of bells and harps in the wind. It is of the color of the weather, and its symphonic splendors vary with the passing hours.”

Knowles Chapel’s window, like most of its genre, contains plenty of symbolism and numeric specificity: seven liberal arts, seven doves, seven pillars — and the window is divided into 12 sections. It was the content, however, that created a substantive deviation from conventional practice. 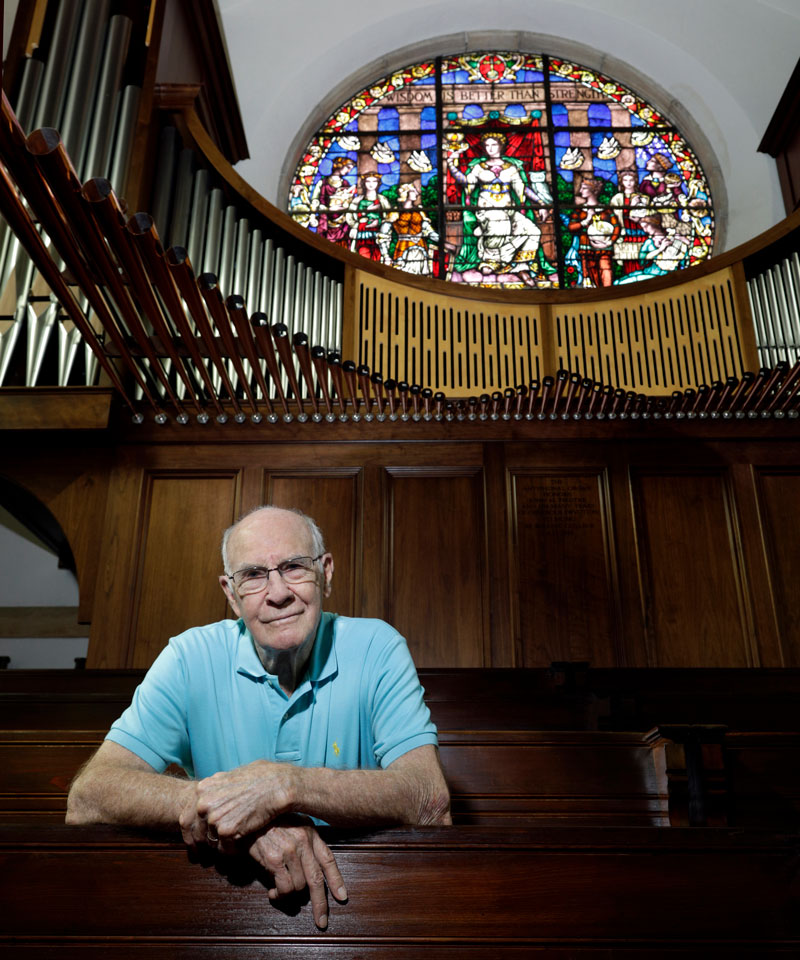 Jack C. Lane, professor of history emeritus at Rollins College, has researched just about every aspect of the college’s history. He says visitors need not follow the rose window’s complex symbolism to appreciate its sheer beauty: “If it’s a sunny day, you’ll be astonished and perhaps even reverentially moved by the light pouring through the multicolored glass.” Photo by Rafael Tongol

The window was intended to serve a didactic function for the college community. That is, it was to provide a permanent visual tutorial on the origins of the liberal arts and to symbolically instruct the college on the moral and sacred purposes of a liberal education.

College benefactor Frances Knowles Warren’s original donation for the chapel didn’t include enough financing for such an elaborate creation, so architect Cram left a circular space high above the west entrance to be filled when additional funds became available.

Mabel Knowles Gage, Frances’ sister, soon came to the rescue and the window was installed in 1934, two years after the chapel’s dedication. The finished product was the result of a  collaboration between Cram and William Herbert Burnham, one of the nation’s most renowned stained-glass artists.

Burnham had been working with stained glass since 1904 and, like Cram, was entranced by gothic cathedrals. Prior to World War I, he had traveled extensively in Europe, sketching rose windows and eventually mastering the unique techniques required for their construction.

In 1922, he founded William H. Burnham Studios of Boston and immediately attracted the attention of Cram, then the country’s leading neo-gothic architect. By 1932, Burnham had become Cram’s favorite stained-glass window designer.

According to Burnham, Cram chose the Renaissance version of the seven liberal arts as the Knowles Chapel window’s theme and provided some general guidelines about the elements that should be pictured. Perhaps his choices were influenced by their compatibility with the chapel’s Mediterranean Revival architecture, which borrows from gothic as well as Spanish and Italian Renaissance styles.

The concept of the “liberal arts” originated in ancient Greece and Rome, then was revived in the Late Middle Ages and reached its classic form during the Renaissance.

Throughout this evolutionary process, the fundamental premise of a liberal arts education remained the same: to provide young people with a general course of study that gave them the wherewithal to live flourishing, productive lives rather than a “mechanical” education intended for a vocation.

By the time of the Renaissance, the liberal arts had been narrowed to encompass seven subjects: the Trivium (grammar, dialectics and rhetoric); and the Quadrivium (geometry, music, arithmetic and astronomy).

For the window’s central image, Cram selected “Wisdom,” which he believed to be the paramount purpose and aspirational outcome of a liberal arts education. Burnham depicts Wisdom as a “regal, heroic” female figure and places her at the design’s very center. 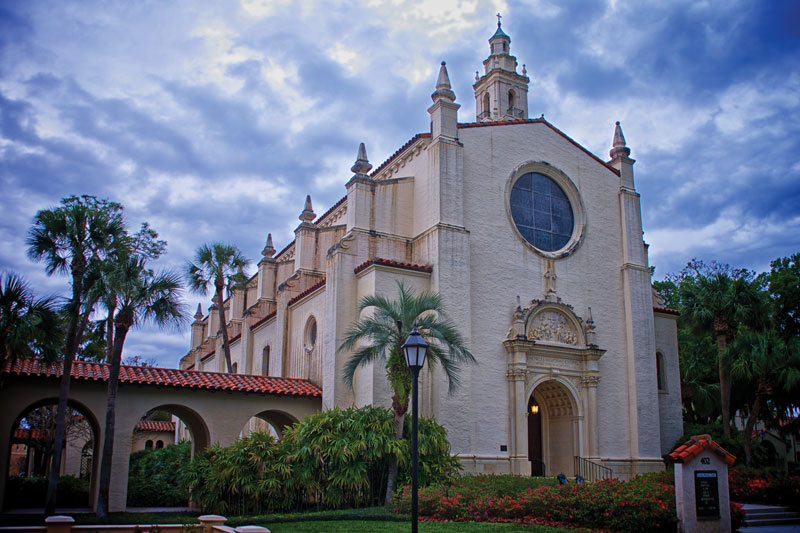 College benefactor Frances Knowles Warren’s original donation for the chapel didn’t include enough for an elaborate stained-glass window, so architect Ralph Adams Cram left a circular space high above the west entrance to be filled when additional funds became available. Mabel Knowles Gage, Frances’ sister, came to the rescue and the rose window was installed in 1934. Photo by Winter Park Pictures/winterparkpictures.com

Silhouetted against a ruby-colored curtain that hangs from three pillars, Wisdom holds the lamp of knowledge and has an owl at her left hand. The lamp fits nicely with the college’s motto, “fiat lux” — which translates to “let there be light” — while owls often symbolize wisdom and erudition.

Wisdom is crowned with a golden wreath of laurel and clothed in a silvery white robe with gold and blue highlights. According to Greek mythology, the wreath symbolizes triumph, while white is often associated with purity and goodness. Her over-mantle is in soft, green hues.

The seven liberal arts, also represented by female figures, are arranged around Wisdom, each holding the applicable attributes. Following is Burnham’s explanation of the Trivium figures:

And then the Quadrivium: “Geometry” holds a globe and compasses; “Music” plays a lyre; “Arithmetic” holds an abacus; and “Astronomy” holds an astrolabe (an early instrument used by astronomers and navigators) through which she gazes at the stars.

The conventionalized acanthus leaf is used as a motif for the rich border of rubies and golds. In Mediterranean countries, the acanthus leaf represents immortality.

After absorbing this extended explanation of the window’s design, the reader may be excused for wondering: What do all these secular symbolic representations have to do with a chapel designed for religious services? Wait! There’s more.

Although it’s less obvious, the window does contain an important religious component. Hovering above Wisdom are seven doves, and behind her are seven pillars, both representing the seven gifts of the Holy Spirit.

These gifts, an early Christian set of beliefs taken from the Book of Isiah 11:1-2, include wisdom, understanding, counsel, fortitude, knowledge, piety and fear of the Lord. As explained by Saint Augustine — who, incidentally, occupies the northern stained-glass window in the chapel’s apse — the gifts correspond to personal virtues of charity, faith, reverence, prudence, courage and hope.

These Biblical texts and the seven gifts were, of course, appropriate for a Christian chapel, but they were intended for an even larger purpose. Cram believed deeply that religious instruction was an essential element in a liberal education.

A college education, he once declared, “should develop all the intellectual and spiritual qualities of young people.” The most effective way to achieve this, he argued, was immersion in religion. 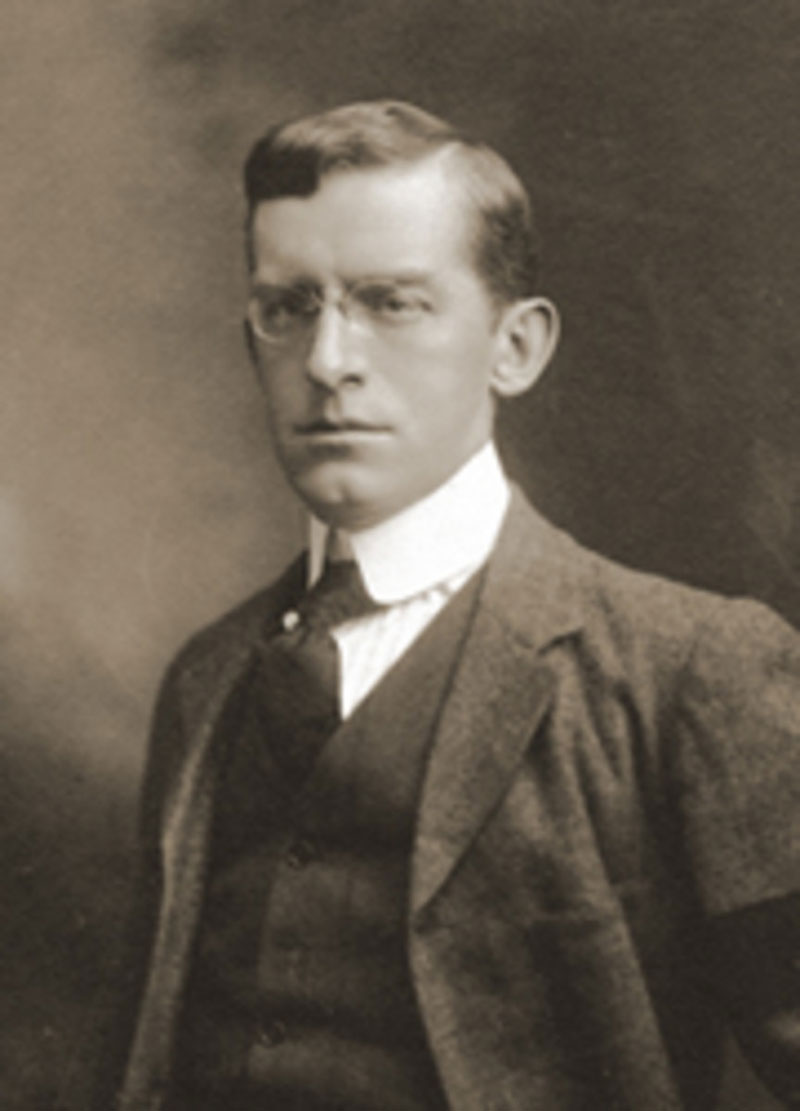 Architect Cram believed that a college education “should develop all the intellectual and spiritual qualities of young people.” Perhaps this stance influenced his suggestions for elements that should appear in the rose window, which was designed by William H. Burnham of Boston.

It was a “damnable opinion,” Cram contended in 1914, “that education [and the inculcation of ethics] may be divorced from religion. We have pretty much learned by this time that there is no effective education that is not interpenetrated by religion at every point.”

Burnham agreed, saying that the window’s words and the seven gifts symbolized by doves and pillars “signified the sanctification of the liberal arts by spiritual force.”

Thus, for Cram, the window played an essential role in the larger meaning of Knowles Memorial Chapel. The beautifully designed chapel was mainly a venue for religious services — but just as importantly, in an age of growing secularism, it served to emphasize the centrality of religion at Rollins — which was, after all, founded by the Florida Congregational Association and had as its first president a Congregationalist minister.

The window functioned symbolically to tie the chapel’s religious purpose to the college’s academic life and stood — indeed, still stands — as a constant visual reminder of the liberal arts-cum-religious roots of the college’s traditional liberal education mission.

At the dedication of the window, then-President Hamilton Holt, in his customary poetic style, captured the beauty of the work and revealed its meaning to the chapel and the college community:

“The rose window, gathering the rays of the Southern sun, is like a luminous jewel upon the breasts of this beautiful body of the chapel. It is appropriate in a college that the dominant, central theme of Wisdom be identified with both education and religion.”

For Holt — and for Cram — the window united the sacred and the secular, faith and reason, the liberal arts and divine wisdom. But, deeper meanings aside, it can be enjoyed strictly for its sheer beauty.

Just look up and you’ll see what I mean.