If we all learned one thing this past year, it’s that we can be flexible. Stay home. Dine outdoors. Ditch stiff clothing. Winter Park’s restaurateurs adapted along the way, too, perhaps none more than Financier, a comfy French eatery that opened on Park Avenue in December 2019 — three short months before you-know-what.

By the time this petite purveyor of Parisian breakfasts and impressive pastries emerged from the worst of the year-long travails caused by the pandemic, the operation had been entirely transformed.

Financier now has Bistro & Bar à Vin after its name instead of Patisserie & Café. Its menu is smaller, heavy on “bistro classics” and entrées, with baked sweets all but absent.

The hours of operation, once 7 a.m. to 10 p.m., are slimmer too, as breakfast is no more and lunch — originally a brief menu meant to accompany coffee — is the main meal of the day (although it is often consumed during brunch hours). An abbreviated dinner menu is served on select evenings.

That concept is gone, and that’s OK. Today, Financier is a charming bistro with familiar Gallic staples and a curated wine selection plus mimosas and wine cocktails — all served at shaded outdoor tables and in a dreamy, Old World-style space with dark woods and ruffly lamps. The back wall is covered in wallpaper resembling old books.

Financier survived the shutdown and the COVID-19-era’s light crowds like most of us did — by adapting. The restaurant was meant to be a clone of the several Financier Patisserie & Cafés serving French pastries and light meals in New York City.

Théo ran the pastry production kitchen for the chain — owned by Manhattan-based HPH Hospitality Group — which at times has had as many as 14 restaurants under its umbrella. Eager to relocate with their young children, the Goupils — 27 (Théo) and 28 (Danielle) — arranged to scout a location for a Financier outpost in Central Florida, then run it.

And so they did, selecting a storefront most recently vacated by The Rustic Table. The space was designed by Prototype Design Lab, the same firm that conceptualized the interiors of several other HPH-owned eateries, including Harry’s, a classic Big Apple steakhouse just a block from Wall Street.

So iconic are Financier’s green and white stripes that New Yorkers in Winter Park could tell what the restaurant was going to be before the sign even went up. That pre-sold following among erstwhile Big Apple denizens boded well for the Goupils, who were pleased that all went according to plan — for not quite three months.

The son of a French pastry chef and a food industry veteran himself, Théo is no stranger to chaos; pandemonium is built into that profession. He pivoted into survival mode and today, candidly and humbly, shares his trials, errors and experiences as he continues to rebuild his newbie bistro like a schoolboy relentlessly reworking a Lego creation.

Just as Financier was finding its footing, it had to close for two months. Then it reopened with six staffers instead of 20 — with Théo and Danielle comprising two of the six. Also, the Goupils found that customers didn’t want sacher tortes, almandines, raspberry white chocolate mousse and chocolate eclairs anymore. Mon dieu!

Remember how we all tucked into comfort foods in the pandemic’s early days? We cooked beef stews and mac ‘n’ cheese, baked our own breads and generally sought out treats that we fondly remembered from our childhoods. 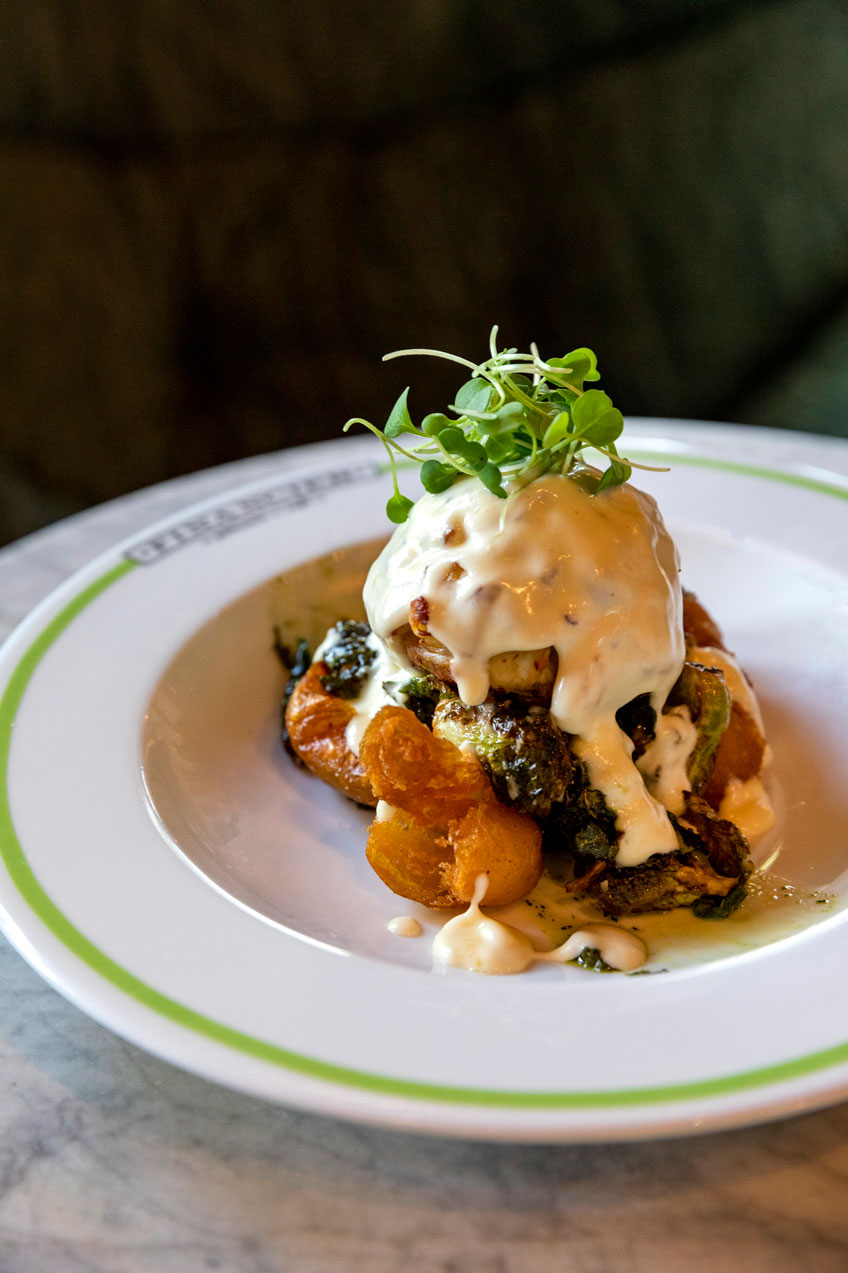 Financier, however, was selling artistic edibles in an era of peanut butter cookies and financiers (small French almond cakes, for which the restaurant is named) when folks craved fluffernutters. “Something changed, and people seemed uncomfortable with elegant, fancy desserts,” Théo notes. “So the pastry program kind of died a little bit — which was hard because that’s my roots.”
That’s when the savories began to take center stage. But Financier’s non-sweet dishes really, truly, need to be eaten on the premises — and at that time, to-go meals were all the rage.

“The only things on our menu good for takeout were the burger, the croque monsieur sandwich and the bacon croissant,” says Théo. “I would never order a steak frites to go. Eggs Benedict would be a mess in a box.”

Be that as it may, Financier made it through — and business is picking up as vaccinated people have become more comfortable dining indoors. Those who come in should experience a much-appreciated treat after a year of eating easily transportable foods from styrofoam containers.

The menu offers bistro classics, including that croque monsieur (or madame). It’s basically a French ham and cheese sandwich made with ham (naturally), Gruyère, parmesan and a simple béchamel sauce on sourdough bread. The madame version gets a poached egg on top.

Monsieur or madame, either way it’s quite a production. The kitchen team stacks the sandwiches in advance, lets them “rest” in the fridge and then bakes them — finishing by bubbling up the cheese under a gadget called a salamander.

After two independent visits at which I was floored by how fabulous Financier’s food was, I returned with a posse of tasters before reaching out to the Goupils for this feature. Our experience was mixed, but not enough to sway me away.

We ordered a whole lot of food, and most of it arrived at our sidewalk table lukewarm — likely because of the logistics required to prepare and transport it all from the small kitchen. The culinary skill, the quality ingredients and the heart behind it all were evident.

I’ll try that steak frites again — although I’ll request to have it delivered to my table the second the chefs finish plating it. I’m an unapologetic medium-steak gal, and my sliced strip steak came out just right. There was a pool of ruby-brown liquid at the bottom of the plate that combined steak drippings and the extras that enhance the beef.

“Most restaurants cook their steaks on a flat-top grill,” Théo explains. “Mine are seared in a pan, dry, then once it’s gotten a sear we add a nice amount of butter and continue cooking the steak in the butter — which browns, almost to a nutty flavor.”

That butter, incidentally, is laced with herbs de Provence, salt and pepper. The french fries alongside are addictively thin and crispy, but not house made — yet. Théo speaks wistfully about from-scratch fries, lamenting his lack of space and staff so sincerely that I suspect he’ll find a way to make them over time.

The smoked salmon is notably excellent at Financier. I first had it on a toasted croissant and was obsessed with having it again. A frustrated smoked-salmon shopper myself, I understand how Théo must have scoured Central Florida for a worthy source of this tasty fish before turning to a supplier in New Jersey who offered a spectacular product.

We had started our feast with baked brie, here baked to gooey glory then topped with fig jam and enhanced by bits of walnut. My troupe wanted more walnuts — and toasted walnuts at that. Let’s just say that by the time you read this, Théo will likely be using crisper, darker nuts once again. He’s more than willing to listen to feedback and adapt accordingly.

As for the Caesar salad: It’s just OK. It needs some bite, both crunch-wise and flavor-wise. The croutons, though, are lovely housemade bits of sourdough bread that have been lightly toasted, then pan-fried to golden in olive oil and topped with salt and herbs de Provence.

Whatever you order, add a side dish called Dijon brussels sprouts. Théo roasts the sprouts then tosses them in the deep fryer for a second or two so they crisp up. Then he drizzles mustard vinaigrette over the toasty brown orbs. He does the same with baby spuds for the “smashed” potatoes served with some dishes. Another reason to return.

One more tip: A crab cake has been wildly popular as a special for a few months. It’s loaded with jumbo lump crab, baked and served with a smear of lemon cream made of butter, shallots, garlic, salt, pepper, pearl onions, crème fresh, lemon juice, lime zest and segments of lemon and lime. I’ll try that next, along with the smashed potatoes.

See you on the Avenue. Just look for the outdated “Patisserie” sign. Yes, it will be swapped out when the Goupils can get around to it. But we’re being fluid in 2021, remember?