A MONUMENT TO A GENTLE SOUL 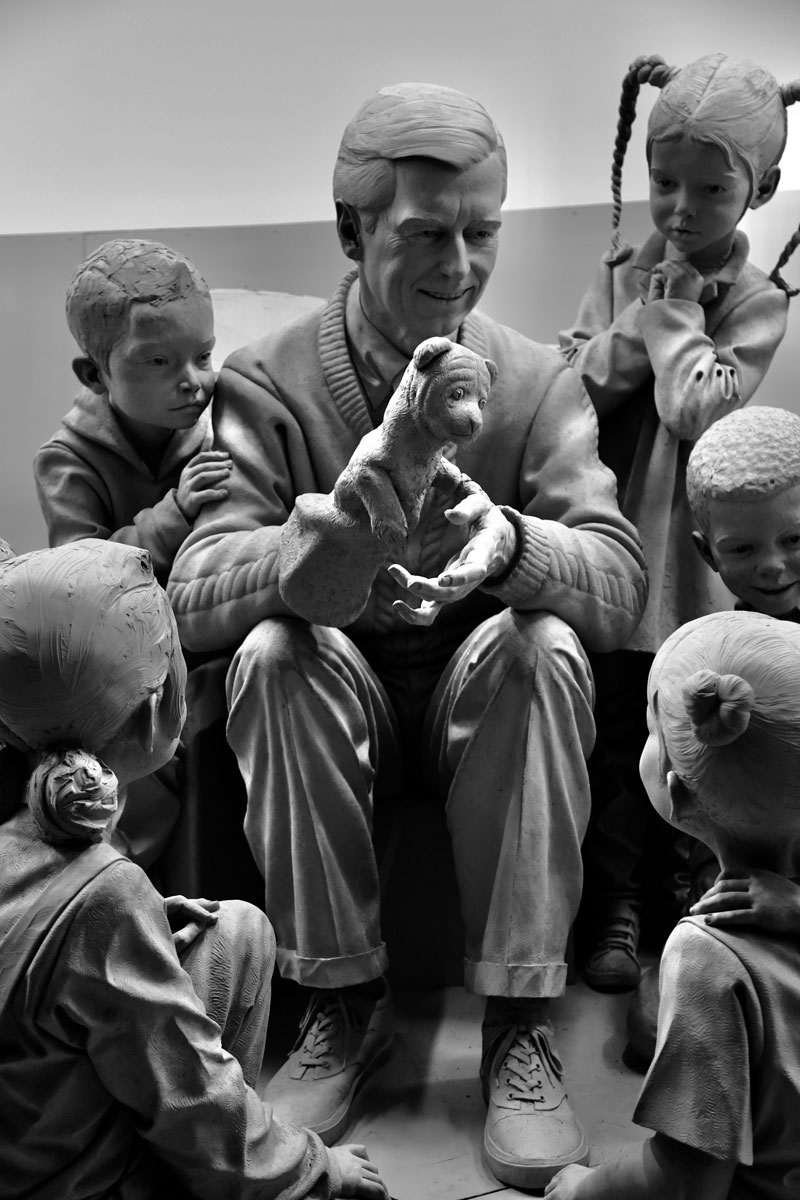 Last winter in this space, several months before the world changed, Winter Park Magazine revealed that a Rollins College graduate named Fred McFeely Rogers (Class of 1951) would be immortalized with a sculpture on the picturesque campus where, as an undergraduate, the soft-spoken music composition major was inspired by a plaque that read “Life is for Service.”

Paul Day — whose public-art installations include The Meeting Place, a 30-foot-tall sculpture in London’s St. Pancras International, a major railway station — had already been commissioned to create a bronze monument to the man who had become known worldwide as Mister Rogers.

Then, in March 2020, everything went to hell in a handbasket. I assumed that the project, much like life as we knew it, had been put on hold because of the COVID-19 pandemic.

But since Allan Keen was the primary mover and shaker behind the initiative, I should have known better. At this writing, Day has completed the work, entitled A Beautiful Day for a Neighborhood. The clay creation is now being bronzed in the Czech Republic and will be installed, with much fanfare, in October at a campus location yet to be determined.

Expect whatever patch of real estate the monument ultimately occupies to become akin to a holy place for fans of Mister Rogers and his PBS series Mister Rogers’ Neighborhood. And isn’t that just about everyone?

I’ll briefly recap how it all came about. Keen, who in 1968 earned an MBA from the college’s Crummer Graduate School of Business, is today owner of the Keewin Real Property Company in Winter Park. He has twice been chairman of the college’s board of trustees (from 2006 to 2008 and 2016 to 2019).

In May 2019, Keen and his wife, Linda, were enjoying a barge canal cruise through rural France when they noticed some intriguing sculptures in the vessel’s gathering area. The wife of the barge captain explained that the artist was Day, a world-renowned figure who happened to be a family friend. Would they care to visit his country studio near Dijon in Burgundy, France?

Well, of course they would! Then Keen had a thought. Because of Day’s international reputation, wouldn’t a Mister Rogers monument created by him be a meaningful addition to what was already regarded by U.S. News & World Report and others as the most beautiful college campus in the country?

Day, however, was unfamiliar with Rogers. So, at Keen’s invitation, the sculptor visited Rollins in September 2019 to scout locations and interview administrators and staffers who could testify that the man and the TV personality were essentially one in the same. Mister Rogers, Day discovered, was the real deal.

The monument — which was funded by private donations — is seven feet tall and weighs 3,000 pounds. Rogers, who continued to visit his alma mater until the final year of his life, would surely appreciate the fact that he is shown seated — wearing his trademark sweater and sneakers and surrounded by children.

Just look at the faces of the youngsters. They’re enthralled by Daniel Striped Tiger, to the obvious delight of the puppet’s creator, whose familiar gentle smile will compel you to smile back — regardless of how terribly your day is going.

Other residents of the Neighborhood of Make-Believe adorn the back of the monument, while lyrics from “Won’t You Be My Neighbor” are inscribed on the base. Suffice it to say, there isn’t a heartstring that this overdue homage doesn’t pluck.

Keen says that A Beautiful Day for a Neighborhood will cost north of $600,000. But given the state of the world and the ability of Mister Rogers — nearly two decades after his death — to uplift and inspire, I’d say it was a bargain.