I’LL HAVE ANOTHER CUP OF COFFEE 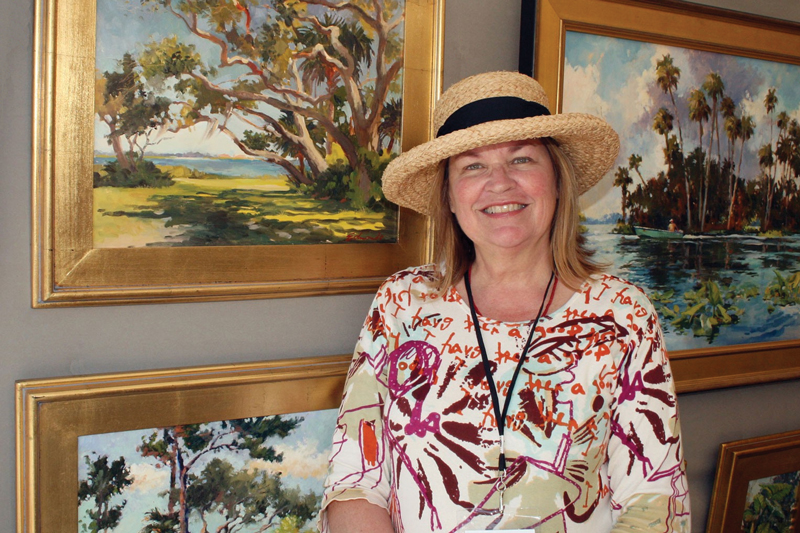 Cynthia Edmonds, whose works have appeared on Winter Park Magazine covers three times, is a popular plein-air painter who lives in the house where she grew up near Lakemont Elementary School.

Award-winning plein-air painter Cynthia Edmonds discovered her passion for art as a youngster taking classes at the Rollins College Summer Day Camp. Now she doesn’t have to go any further than her backyard to find inspirational settings.

Edmonds, who lives in the circa-1950s house where she grew up on North Phelps Avenue near Lakemont Elementary School, has cultivated what she describes as a “secret garden” just outside her doorway.

It showcases an array of native plants including sand live oaks, cabbage palms, saw palmettos, coral honeysuckles and such pollinators as coontie plants to attract butterflies and hummingbirds. In fact, an image of her garden appeared on the cover of the Summer 2019 issue.

Park Avenue Café — the third painting by Edmonds to grace a Winter Park Magazine cover – marks a departure from nature themes and captures a familiar scene at the iconic Briarpatch Restaurant, where countless Winter Parkers enjoy breakfast, lunch and people-watching.

That’s never been more true than now, in the era of COVID-19, when many are choosing to dine outdoors for safety reasons. Although Park Avenue Café predates the pandemic, Edmonds updated the painting to add masks to the server and several bystanders.

“This scene is so Winter Park,” says Edmonds. “I especially liked the way the figures were backlit by the sun shining from Central Park across the street. The graphic design of the awnings and roofline also appealed to me.”

Edmonds, who has a bachelor’s degree in fashion illustration from Florida State University, hasn’t always painted for a living. She worked for many years as an advertising illustrator for local retailers, including Ivey’s, Jordan Marsh and Hattie Fredrick.

She later earned a master’s degree in fine arts from the University of Florida and moved to Washington, D.C., and later Seattle. There she worked as a photo art director and catalogue designer for Nordstrom while simultaneously discovering the wonder of oil painting.

“Each day, painting en plein air provided an exciting challenge to capture the ever-changing light and shadow,” she says. “Working on location inspires me in a profound way, and observing nature helps me to understand the shape, form and infinite colors of my subjects.”

Edmonds, who returned to Florida in 2001, is a signature member of the American Impressionist Society and Plein Air Florida. She participates in plein-air exhibitions throughout the U.S. — including the annual Paint Out Winter Park, sponsored by the Albin Polasek Museum & Sculpture Gardens.

Edmonds’ paintings can be found in collections at the University of Central Florida and the Maitland Art Center. Her paintings are also included in the St. Joe Company’s Forgotten Coast Collection and the Shands Arts in Medicine Collection at the Venice (Florida) Regional Medical Center.

Aficionados of Winter Park Sidewalk Art Festival memorabilia will recall that Edmonds’ image of Greeneda Court on Park Avenue adorned the official festival poster back in 2007.

Edmonds loves to paint in her wildlife habitat garden and around Winter Park, but also finds inspiration in Maine, France and Italy. More of Edmonds’ work can be seen at cynthiaedmonds.com.