A STRUM AND A SPLASH FROM EMILY 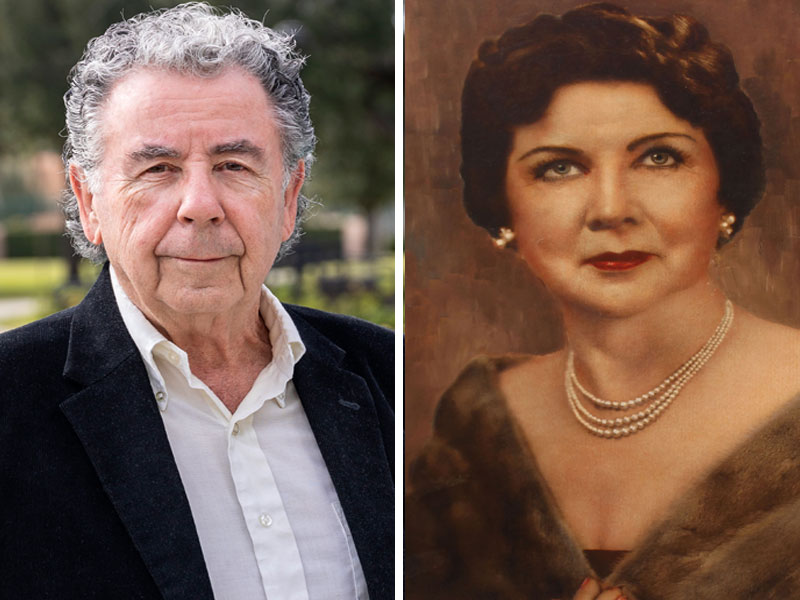 Jerome Donnelly recalls sharing coffee and conversation with his elderly next-door neighbor, Emily Muska Kubat Polasek, widow of sculptor Albin Polasek. Emily had established a foundation in her husband’s name and opened their Mediterranean-style home as museum in 1965 despite still living on the premises.

There was certainly plenty for visitors to see. Albin had been a world-renowned sculptor whose works dotted the lush grounds along Lake Osceola. “Emily was a very kind, delightful woman,” says Donnelly, a professor of English at the University of Central Florida (then Florida Technological University) who had come to Winter Park from Ann Arbor and the University of Michigan.

Donnelly quickly found himself entranced with one of Albin’s less-imposing works: “Emily,” a bronze figure of a kneeling nude woman playing a harp on which delicate streams of flowing water formed the illusion of strings.

It reminded him of “Sunday Morning in Deep Waters,” a Carl Milles sculpture depicting Father Triton and his sons on a holiday excursion. The Swedish sculptor’s work was a landmark on the campus in Ann Arbor. “I loved the stillness of the sculpture and the movement of the water,” he says.

Then Donnelly had an idea. North Central Park had a fountain — sort of. But it was a small bricked oval pool from which water spurted upward through an unsightly lead pipe. “I thought a replica of the sculpture would be perfect for Central Park,” says Donnelly, who served on the Winter Park City Commission from 1972 to 1980.

Donnelly says he doesn’t recall realizing that the youthful-looking harpist was modeled on the real-life Emily. In fact, the 1961 work was the Czech-born sculptor’s wedding gift to his second wife and features her face on the woman’s body. “She was interested,” says Donnelly of Emily’s reaction to having a replica in the city’s signature park. “I think she enjoyed the idea.”

At Donnelly’s behest, the city accepted the gift and offered up the forlorn fountain as a location. “I’m more or less overwhelmed,” said Mayor Hope Strong Jr. The foundation covered the $12,000 cost of sending a plaster model to New York to be bronzed — a process that was completed in 1982. The city decided, however, to dedicate the statue to the Winter Park Sidewalk Art Festival in honor of the popular annual event’s 25th anniversary, which was coming up in 1984.

In anticipation of the milestone, the all-volunteer Winter Park Sidewalk Art Festival Commission raised more than $3,000 for a brick base and a commemorative plaque. The Aquarium and Fountain Shop in Casselberry was paid about $7,000 for plumbing  and lighting but donated an additional $2,000 in services

The statue was installed in 1983 and a formal unveiling — accompanied by appropriate hoopla, including speeches by dignitaries and a performance by the Seminole Community College Orchestra — was held the following year to kick off the art festival. Unfortunately, the flesh-and-blood Emily was hospitalized and unable to attend the festivities. She died in 1988, at age 91.

Today you can still see the first “Emily” at the courtyard of the Albin Polasek Museum & Sculpture Gardens. And you can see what has come to be known as the “Emily Fountain” in north Central Park. There is one key difference, however: The water flows much more delicately on the original; the downtown version is perennially soaked by errant blasts, which is much harder on the bronze surface.

“It’s still wonderful,” says Donnelly, who is also remembered as the driving force behind founding the Winter Park Farmer’s Market and remains outspoken in civic affairs. “It lights up that whole end of the park.”

Editor’s Note: This is the first in a periodic series of stores about monuments in the city. If you’re curious about any of them, email randyn@winterparkmag.com and we’ll give you the full story.