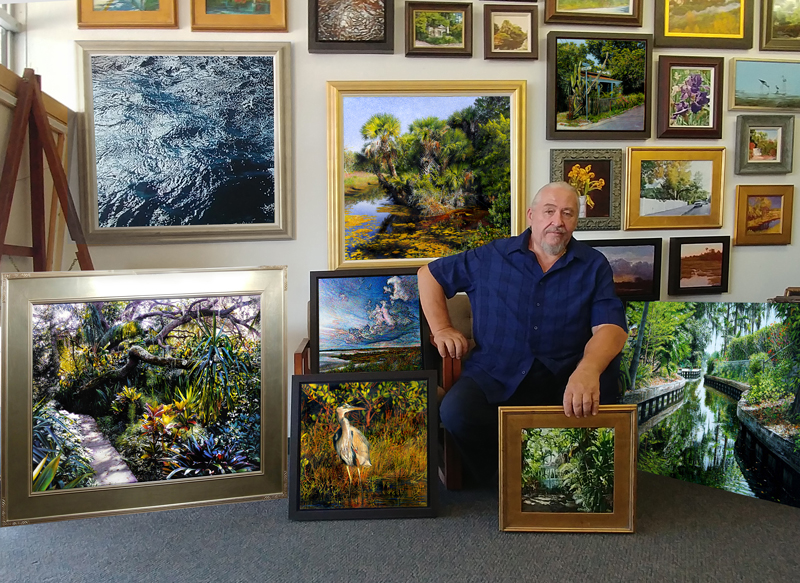 Henry Peter, a self taught artist known for the photographic quality of his paintings, has found collectors on four continent for his meticulous (and vivid) depictions of outdoor scenes. He describes his work as “simple and direct; free of artifice and superficial mannerisms.”

Henry Peter, a native of Burglengenfeld, Germany, and a resident of Brevard County, is primarily a self-taught artist. Which is remarkable considering the photographic quality of his paintings.

Peter is one of Winter Park Magazine’s most popular cover artists. Just last fall, he provided a cover image of the iconic exedra in Kraft Azalea Garden. This issue, he turns his attention to the popular Scenic Boat Tour, which traverses two lush canals connecting lakes Osceola, Maitland and Virginia.

The original painting, called Cap’n Dan’s Tour, is a vertical image, so only a detail is shown on the cover. The entire, uncropped work is reproduced on page 8. The Scenic Boat Tour is one of Florida’s oldest attractions, in operation since 1938, and has for generations been a must for local visitors.

As a 12-year-old in Engelwood, New Jersey, Peter recalls receiving a few lessons on color and theory from painter Margaret Stucki, a vehement realist who, ironically, moved to Brevard County in 1973 and taught art for Rollins College when it offered evening programs at Patrick Air Force Base.

“When I moved down here, I tried to get in touch with her but didn’t hear back,” says Peter of Stucki, who wrote a book denouncing contemporary art as “crud.” She died in 2017 — but would likely be pleased that her former pupil has garnered a large following with his meticulous (and vivid) depictions of outdoor scenes.

The first work by Peter to appear on the cover of Winter Park Magazine was a 2015 image of the Venetian Canal and the Palmer Avenue Bridge. Several dozen readers emailed to ask who had taken the beautiful photograph — which was, in fact, an oil painting.

Peter earned a degree in philosophy from Franciscan University in Steubenville, Ohio, and after graduation apprenticed in a machine shop. But by the late 1980s, his paintings had begun winning regional and national awards.

In 1993, Peter made his first trip to Florida, where he displayed his work at the Old Island Days Festival. He moved to Key West a decade later, then relocated to Titusville in 2008.

Peter’s paintings have been selected for the Top 100 in the prestigious Arts for the Parks competition, a program created by the National Park Academy of the Arts to benefit the National Park Conservation Alliance.

He was a mainstay at Key West’s Gingerbread Square Gallery for almost two decades and has been represented by the Fredlund Gallery in Winter Park.

Peter describes his work as “simple and direct; free of artifice and superficial mannerisms.” He enjoys being artistically unpredictable, and applies his keen eye and steady hand to a broad range of subjects — not just landscapes.

You can find Peter’s paintings on display at the Cocco & Salem Gallery in Key West, Palm Avenue Fine Arts in Sarasota and the Village Gallery in Orlando.